Admins can now choose whether their Android users can back up data from third-party apps, such as WhatsApp, to their G Suite accounts. Previously, admins didn’t have specific controls for third-party app backups—all G Suite users who had Drive enabled could back up this data, and users without Drive enabled could not. With this launch, admins can choose whether their users can back up this data, regardless of whether they have Drive.

This backup feature is limited to WhatsApp at launch, but other apps could be added in the future. If WhatsApp data is backed up, it can be used to restore WhatsApp conversation and message history if a user gets a new phone or deletes WhatsApp data from the device (e.g. via a factory reset).

Before choosing to enable or disable the feature for some or all of your users, we recommend that you use our Help Center to learn more important details about managing 3rd-party app backups for your organization. Also note:

This gives admins more control over the content that’s stored in their domain. If enabled, third-party app backups can help users preserve and manage important data.

User experience of using and managing backups
Users will see a link to Backups in Google Drive within the ‘Storage” section (see image below). This will contain their backed-up data. That data could include third-party apps such as WhatsApp (if enabled by their Admin with this control), as well as Android device backups. Users can delete these backups if they choose. Users cannot see the contents of these backups within Drive; they can only be used to restore data in third-party apps.

If admins turn third-party app backups off, users may be notified that their backups are not working properly. To avoid these notifications, the user can turn backups off on their device or back up their data to a different account on their device.

If admins have third-party app backups turned on but have Drive turned off, users may not be able to directly delete their backups through the Drive UI. Backups will continue to be deleted automatically upon expiration. You can also use our Help Center to find other ways to immediately delete backups.

Admins: Starting on 5 February 2020, there will be a new setting in the Admin Console to control this feature at Admin console > Apps > Additional Google Services > Third-Party App Backups. The setting will initially have the same ON/OFF state as the Google Drive service, and can be controlled at the domain, OU, or group level. Visit the Help Center to learn more about managing backups for your organization.

End users: This feature may be available to end users depending on the Admin control. If enabled, backups can be found and managed by users at Drive > Storage > Backups in their linked G Suite accounts. Use the Help Center to find out more about managing backups in Google Drive. 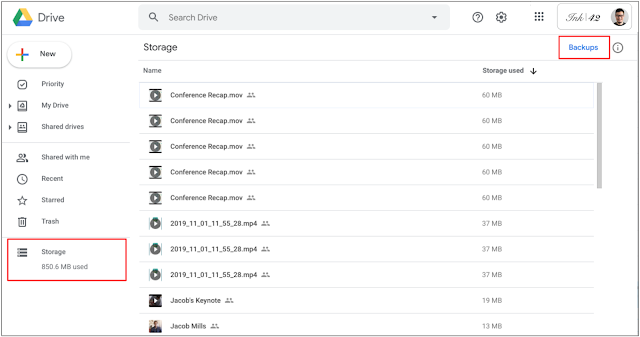 Users can find Backups in the ‘Storage’ section of Google Drive